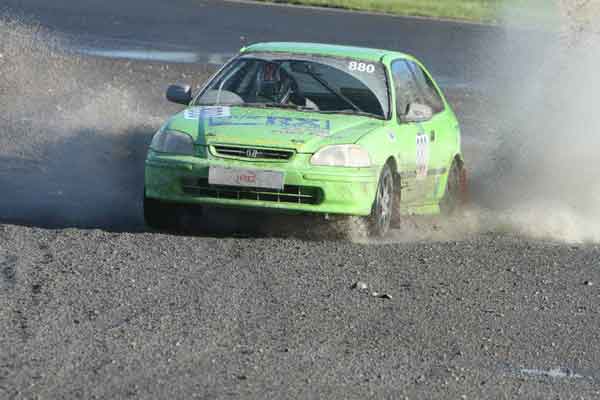 Until last weekend I had only ever done two Rallycross events before and it was some 5 years ago! The Honda Civic couldn’t be any more different than my Formula Sheane if it tried, for a start it has a roof. This new budget class is designed with keeping costs down in mind. The car is pretty much standard with a 1400cc engine, the interior stripped out to save weight, a roll cage bolted in along with a set of lowering springs and run on road tyres.

I couldn’t wait to get on track as it had felt like an age since the Leinster Trophy. Unlike racing there is no pre-event testing for Rallycross. You get a three lap practice in the morning before commencing four timed heats consisting of four laps and then a five lap final. Despite the sun splitting the trees the track was pretty wet for practice. I completed my three laps and returned to the paddock with a smile on my face but also a little worried about just how I would fair out over the day, as I was way out of my comfort zone.

With only time for a drop of fuel before heading to the assembly area for first heats I didn’t have much time to really come up with a plan of attack for the day other than to just go out, have fun but most importantly bring the car back in one piece at the end of the day as instructed!

The grids for Rallycross are chosen randomly and the idea is that everyone gets a front, middle and back row start over the course of the day. Heat one would see me start at the back which I was glad of due to being in with the faster and lighter 1600cc stock hatch cars and with me being inexperienced in getting a front wheel drive car off the line. The starter dropped his flag and we were off! I got a really good start but it quickly went down hill when stupidly I went to change to second gear with my right hand as I would in my Formula Sheane and found the door of the car instead of the gear stick so dropped back a little before quickly getting my left hand tuned into what was going on. All I could do was laugh and get my head down and try finishing the heat and seeing how we would fair out in the next one! 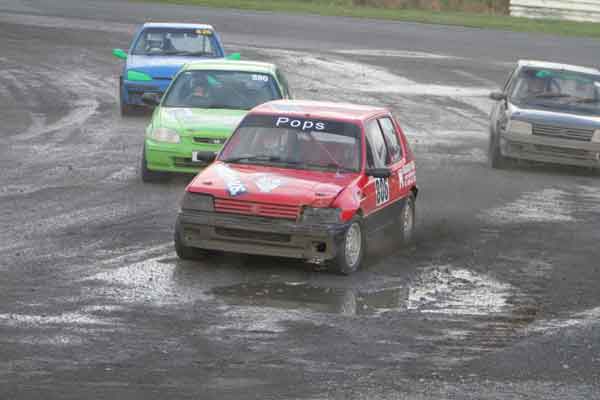 The track was drying in heats two and three so I was learning every lap trying new things all the time. Over lunch there was a great buzz in the Civic RX Challenge garage with a lot of interest in the new class for next year. I spent some time showing a few friends around the car before heading out for heat 4. The track for the final heat was now fully dry. I got a good clean run and managed to finish ahead of one of the faster stock hatch cars.

I started sixth in the Stockhatch B final and if I could manage to finish in the top two I would progress to the A final. Another good start in the Honda would have me up to fifth going into the first corner and finding my way around a two-car incident. Two cars in front then took their joker lap, an extended part of the track you must take once every race and I was up to second. The following lap around I took my joker lap and came out just behind one of the Peugeot 205’s in fourth but he slowly pulled away from me. I had another 205 on my back bumper and I managed to hold him off for a lap despite a little tap on my rear bumper going across rallycross two. He eventually drove past me with his faster car in a straight line on the main straight and I would go on to finish the final in fifth position.

I think its safe to say I have the Rallycross bug back and would love to be able to put something together to get out in a few more events after Christmas. We are still working on our plans for the 2014 racing season so watch this space over the remainder of the winter to see what unfolds.

I would like to thank the County Kildare Motor Club and Colin Dowling for providing the car and running me for the day and I wish them every success with the new class. If anyone is thinking of getting involved in motorsport this would be a great place to start for both guys and gals!